Four principal designs of side-entry globe were used on main estate roads between the 1970s and 2000s: 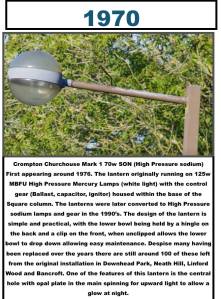 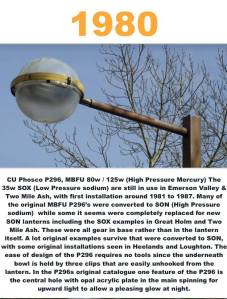 A lower-height version of the grid road column was used for industrial estates. Sometimes these were in the same grey colour as the grid road lighting, whilst brown or even blue columns were used elsewhere. Low pressure sodium lanterns were the norm originally, with high pressure following later. This style of lighting was also used for some non-grid major roads, including sections of the original Brickhill Road and roads around Bletchley.

Some later industrial estates like Shenley Wood and Shelshall West used the same side-entry globes on square columns as the residential estates.

Original redways were lit with the same column-top globes as minor estate roads, but in the 1980s the decision was taken to use side-entry lanterns with an attachment added to the column top to support these. Various lantern designs, most notably the Davis Starline, were used up until the mid 2000s, when column-stop stainless steel came into use. Following the move back away from stainless steel in the mid 2010s the more common ‘hockey stick’ wide-base column found in most towns has been used.